I had to laugh. I started researching the various actors who have played Robert Louis Stevenson’s titular characters, and the following appeared before anything else:

We have from left to right Mark Ruffalo, Lou Ferrigno, Edward Norton, Eric Bana and Bill Bixby. No, they haven’t played Jekyll or Hyde as far as I know, but they have played a character(s) who comes rather close: Doctor Bruce Banner and The Hulk. In his comic book appearances, the character is both the Hulk, a green-skinned, hulking and muscular humanoid possessing a vast degree of physical strength, and his alter ego Bruce Banner, a physically weak, socially withdrawn, and emotionally reserved physicist, the two existing as personalities independent and resenting of the other.

But back to Henry Jekyll and Edward Hyde, a character (or characters) who will make an appearance (or is that appearances?) in the upcoming The Mummy, with Russell Crowe co-starring in the role(s).

And we’ve seen this before, but why not see it again! Can you ever have too much of Russell Crowe?

Stevenson’s work about dueling personalities was published in 1886 and has appeared in stage and motion picture versions for well over a century and almost upon the release of the novella. Here are a few, including some Jekyll/Hyde variations you might not have considered. 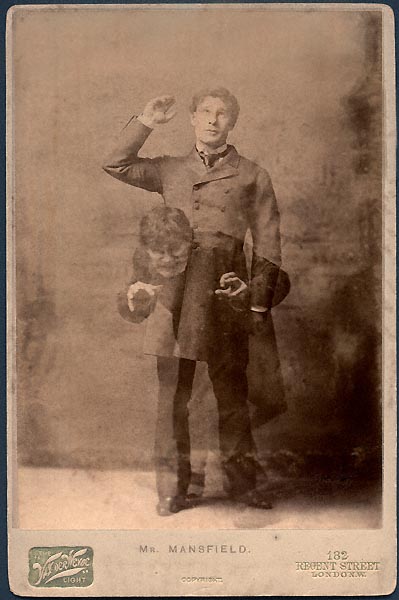 Richard Mansfield was best known for the dual role depicted in this double exposure: he starred in Dr. Jekyll and Mr. Hyde in both New York and London. The stage adaptation opened in New York in 1887 and London in 1888. 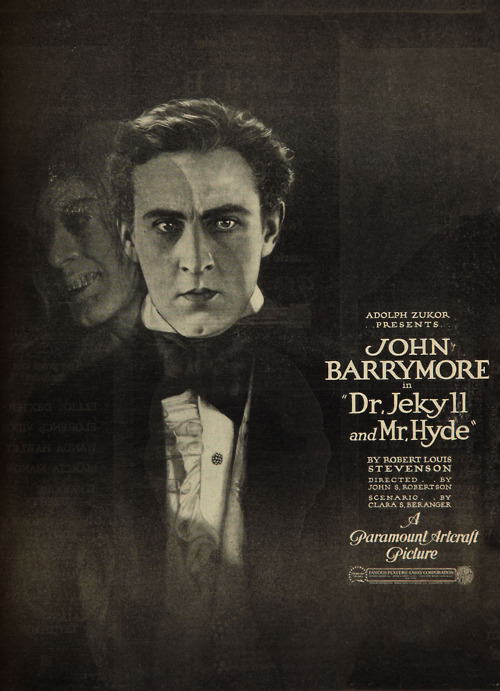 The Great Profile, John Barrymore, in the 1920 silent movie version. “The early part of Jekyll’s initial transformation into Hyde was achieved with no makeup, instead relying solely on Barrymore’s ability to contort his face. In one scene, as Hyde reverts to Jekyll, one of Hyde’s prosthetic fingers can be seen to fly across the screen, having been shaken loose by Barrymore’s convulsions.” The actual transformation begins around the 1:20 mark.

In 1931, Fredric March played the role. I’m not sure what to think of Hyde’s almost ape-like appearance! 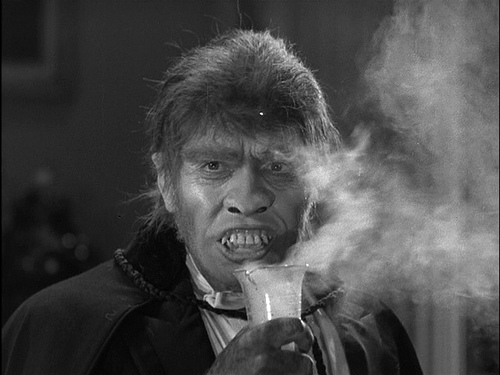 Along comes Spencer Tracy with Lana Turner and Ingrid Bergman in their movie version directed by Victor Fleming of Gone with the Wind and The Wizard of Oz fame.

Because the trailer goes so far as to ‘camouflage’ Tracy’s Hyde – even to asking audiences not to reveal the transformation to others – I’ll go along with that and leave it to you to find some images. 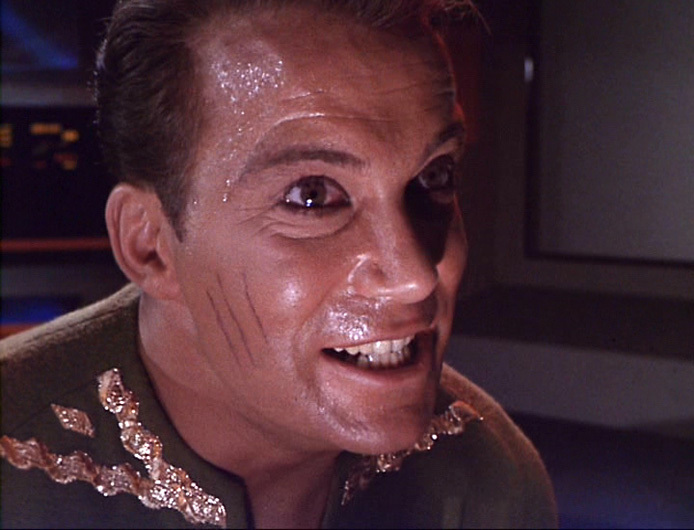 William Shatner as “Evil Kirk” in The Enemy Within, a first season episode of Star Trek, the original series. A transporter incident causes Kirk to be split into two personalities, both of which must be reunited to live. It’s considered one of the best episodes of the series. 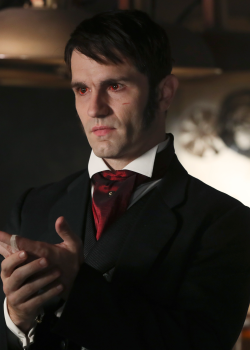 Sam Witwer as Hyde in the Once Upon a Time TV version, while Hank Harris plays Jekyll. OUAT kind of turned the story on its’ head in a unique way. 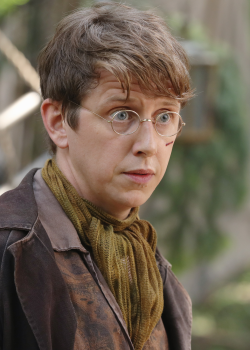 Oscar winner Jack Palance also had his chance at Jekyll and Hyde in a 1968 made-for-TV movie.

I would never have believed it if I hadn’t seen this mentioned during my research, but did you know David Hasselhoff (yes, that David Hasselhoff) played Jekyll and Hyde in a musical? Here’s a moment from the 2000 performance of the Broadway musical, its’ final cast consisting of Hasselhoff.

As Elmer Fudd undergoes some type of Jekyll/Hyde transformation in 1946’s Hare Remover, Bugs Bunny breaks the fourth wall and says to the audience, “I think Spencer Tracy did it much better. Don’t you, folks?”

While the movie stars Julia Roberts in the titular role of Mary Reilly, it is also about the character’s relationship with her employer, Dr. Jekyll and his friend, Mr. Hyde. The great John Malkovich plays Jekyll and Hyde.

Here’s a final example of a type of Jekyll and Hyde because it’s too good to resist since the series has restarted on Showtime. In this case, we have Kyle McLaughlin’s Special Agent Dale Cooper from the original Twin Peaks and prior to entering the Black Lodge where his doppelganger was created. The Doppelganger escaped, trapping Good Cooper in the Lodge. The first picture is of the doppelganger as he is in 2017. And for the last 25 years, Bad Cooper (or as TP fans call him, Mr. C) has been creating havoc we’re still trying to work out.

Ah, Evil Cooper, or Mr. C or whatever you want to call this aberration. He’s the original Cooper’s doppelganger who escaped the Black Lodge and looks like he’s kept busy these last 25 years. 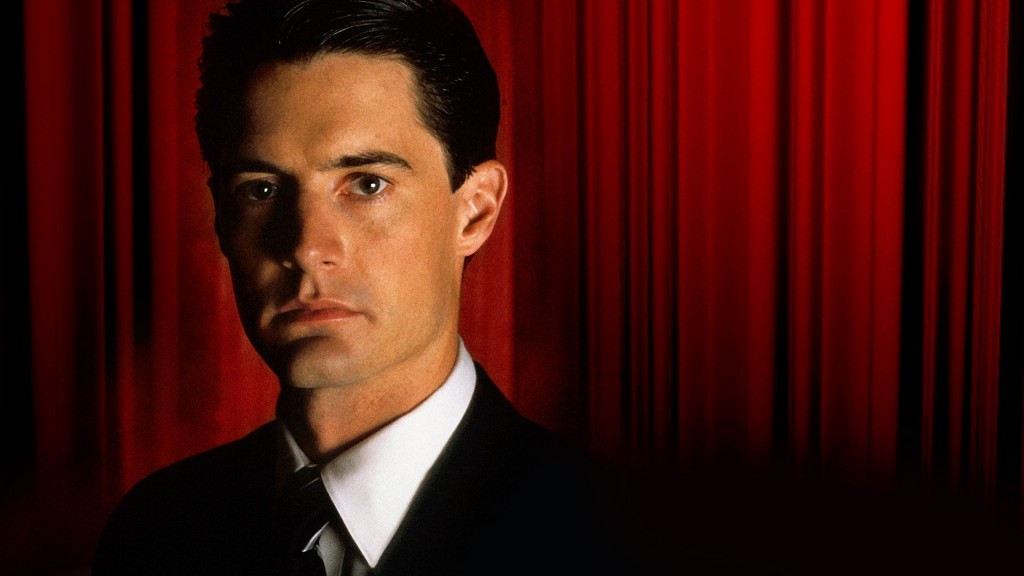