On this date, Ridley Scott followed in the footsteps of Allan Dwan, Michael Curtiz, Kevin Reynolds, Richard Lester and yes, Mel Brooks, when his Robin Hood was released in the United States. 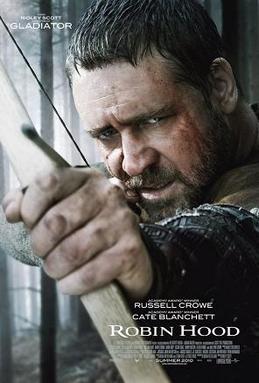 It was the fifth collaboration between Scott and Russell Crowe – Gladiator, A Good Year, American Gangster and Body of Lies having been the others, earning approximately $321.7 million worldwide and mixed critical reviews. As of this date, it is still the second grossing medieval era based film. The top grossing is – and I’m LMAO because this is just too weird – Robin Hood: Prince of Thieves, the notorious Kevin Costner flick.

The Crowe Robin Hood does have a colorful background when it comes to its’ origins. Seems it went from being something called Nottingham in which the Sheriff of Nottingham was the good guy/hero and Robin Hood, well, not quite as much. There was even talk of the good guy sheriff being a medieval version of CSI. (Hrm). After a few more tweakings of the screenplay, the story began to refocus on Robin Hood as the legendary hero we all know. 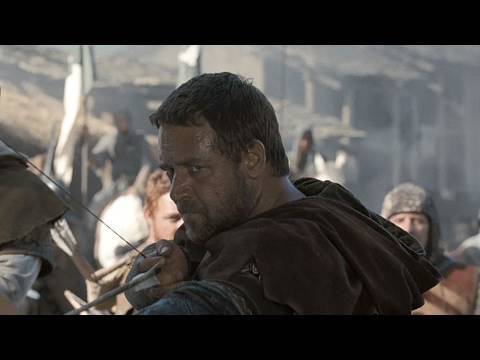 It was also the opening film at the Cannes Film Festival on May 10th of that year.

As usual, critics were all over the place when it came to opinions.

“The legend of the forest-dwelling thief and his merry band has been committed to film scores of times, most definitively in The Adventures of Robin Hood (1938), one of those magical movies in which everything—the casting of then-newcomer Errol Flynn, the crisp vividness of early Technicolor, the jaunty score by Erich Korngold—somehow coalesced into a perfect artifact. Seventy-two years later, the Errol Flynn Robin Hood is still the version to beat, and its shadow—or rather, its lack of shadow, for never has a movie been sunnier—looms over any cinematic return to Sherwood Forest. Scott’s remake is unremittingly dour in the modern style: That’s how we reboot old legends, right? By making sure no one in them smiles?” The Daily Mail was more kind, calling it ‘sumptuous’ and ‘inventive.’ “It’s an affectionate nod to one of the world’s favourite legends, but it isn’t content to be just a roistering romp, along the lines of the classic Errol Flynn picture of 1938….Robin Hood may not be quite as spectacular as his [Ridley Scott] best costume epic, Gladiator, but it is a constantly inventive, visually sumptuous production that sets up the legend of Robin Hood with a huge amount of cinematic skill. This is movie-making on a grand scale, but the more than capable script by Brian Helgeland (LA Confidential) means that it never patronises its audience. It’s a cleverly conceived prequel to the legend, and by the end of its two hours 41 minutes, I was more than happy to sign up to see the sequel.“

The reviewer for NOLA gave it three out of five stars: “Director Ridley Scott approaches his version of the “Robin Hood” legend with the same grand, epic vision he did his 2001 best picture Oscar winner, “Gladiator.” In the process, he provides the most sweeping and eyeball-tickling big-screen view of Nottingham in decades — arguably the best since Errol Flynn set the standard back in 1938.But Scott’s well-heeled production, with its enormous sets and sweeping medieval battle scenes, doesn’t stand out so much for what’s there as much as it is does for what’s left out. That’s because Scott’s “Robin Hood” isn’t merely a retelling of the same merry legend that’s been spun time and time again. Scott’s version — built upon a script by Oscar-winning screenwriter Brian Helgeland (“L.A. Confidential“) — is an origins tale, one that rewinds to before the hero-outlaw took to the woods of Sherwood Forest, and even before minstrels were inspired to warble about him…Still, it’s not the iconic, be-all-end-all that Scott was certainly hoping for, and it does little to rescue itself from being just another entry on the list of “Robin Hood” remakes that will inevitably get trotted out the next time Hollywood heads to Sherwood Forest.” 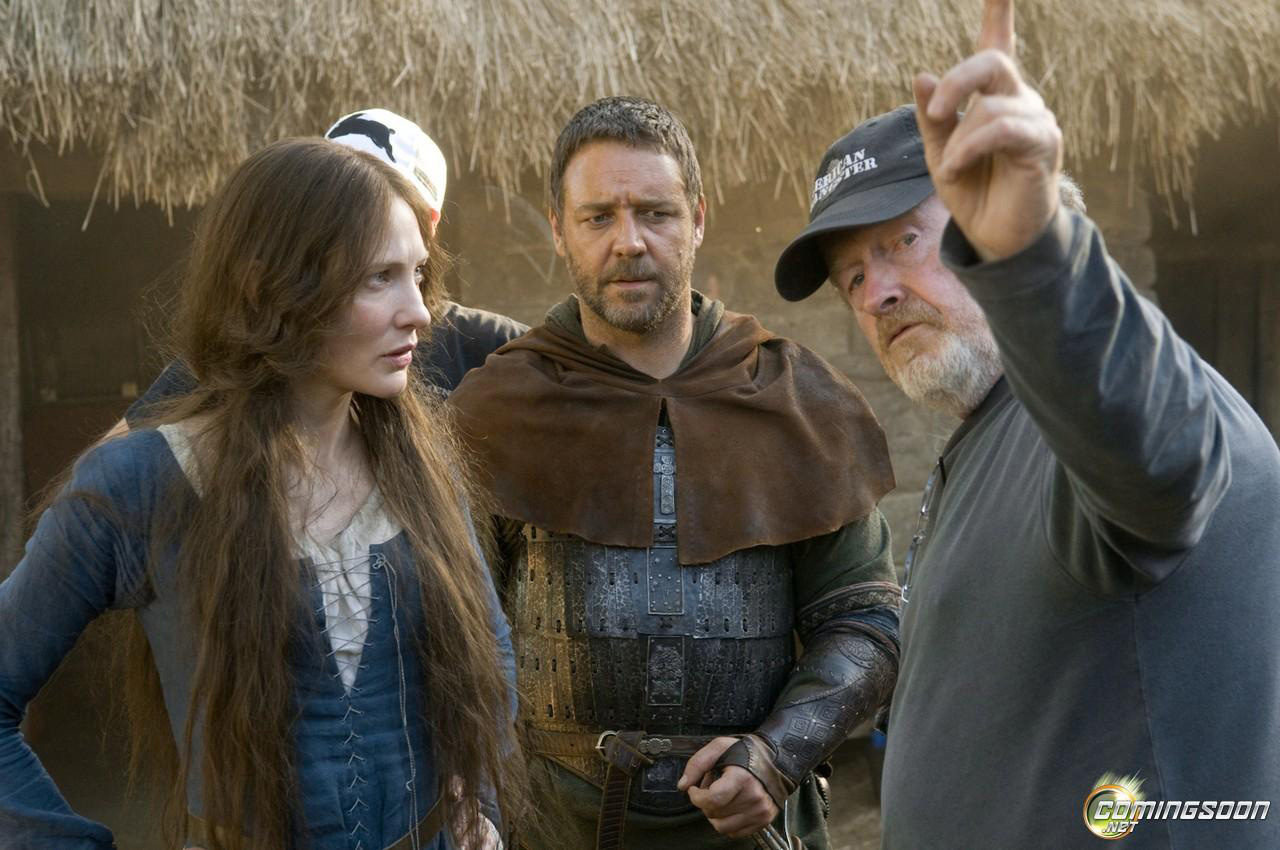 The Independent said the movie was ‘robbed of all its’ merriment’: Yet aside from swapping his Roman breastplate for mediaeval chainmail, you can barely tell the difference between Crowe as Hood and Crowe as Maximus in Gladiator. The latter, now all of 10 years ago, marked the first and most successful collaboration between the actor and the director Ridley Scott. Perhaps that’s why this new film, their fifth together, keeps quoting visually from Gladiator, in the hope that audiences will buy it as a brand…Robin Hood, written by Brian Helgeland, is more of a creation story than the traditional picture of the backwoods outlaw. You will see in it no Lincoln green, let alone the eye-popping Technicolor of Errol Flynn’s costume; no fight on the bridge with Little John; no archery contests; no crashing portcullises or escape to Sherwood Forest; no Norman knight curling his lip and demanding blood. Indeed, for the first half-hour or so we are invited to wonder whether Crowe is “Robin Hood” at all.

And while Moira Macdonald of the Seattle Times gave the film 3 stars out of 4, she was kind to both Crowe and Blanchett, calling them scene-stealers and saying in the title: ‘A review of Ridley Scott’s “Robin Hood.” Russell Crowe and Cate Blanchett have chemistry so potent it may just sear the celluloid.’ 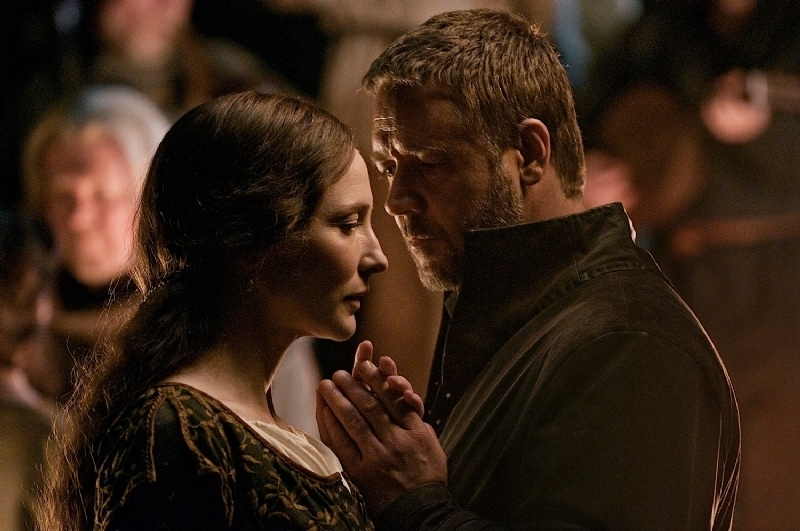 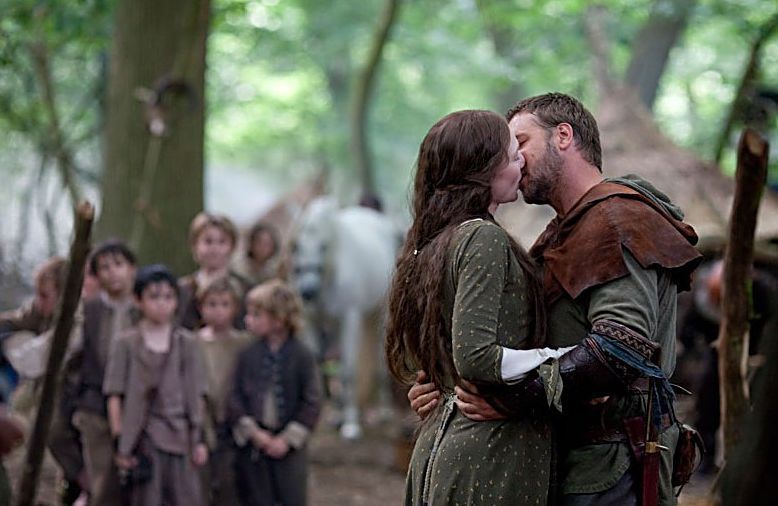 A sequel was in discussion, with Crowe at the time saying he would be more than happy to sign up to an additional movie with Scott and Blanchett. It has not happened.

It’s time, however, to discuss the very obvious elephant in the room which has been hinted at thus far. That elephant is not a favorite of director Scott’s, who I recall at the time making a disparaging comment or two with regards to which of the two Robin Hood movies would stand the test of time.

When one is going up against an almost 80-year-old movie classic, you’d better be putting something out there worth seeing. Comparisons will be made.

Look at Robin Hood: Prince of Thieves and how it was put thru the wringer, even earning the star of Dances with Wolves a Razzie for worst actor of that year. No, we never want to go that route. And while Scott’s Robin Hood may be many things, nothing in it is worthy of a Razzie.

Crowe, of course, wasn’t the first actor to play Robin Hood. We’ve had the swashbuckling Douglas Fairbanks of the silent era (who did the majority of his stunt work). We’ve had Costner. We’ve had Cary Elwes and Cornel Wilde and Richard Todd and Richard Greene. We’ve even had ‘James Bond’ himself, Sean Connery.

But most of all, we had Errol. Errol Flynn of Tasmania, who won hearts in Captain Blood and let’s face it, seems ready-made for the role of Robin Hood. He is dashing. He is swashbuckling. He’s witty, romantic, understanding, sympathetic, angry, handsome, dripping with sex appeal, and hell, he’s the best thing I’ve ever seen in a pair of green tights, so add confidence too!

In a touch of irony, I’m certain Universe’s publicity team was well aware, their Robin Hood was released seventy-two years to the day that Warner Brothers released The Adventures of Robin Hood, still considered one of the classics of Hollywood’s golden age.

Your Keeper must also place all the cards on the table and confess that the 1938 version is among my top 15 favorite movies of all time, in a list which includes among others Master and Commander, Gladiator, Raiders of the Lost Ark, Citizen Kane, The Godfather, The Ten Commandments, The Empire Strikes Back and The Godfather Part II. Call it old-fashioned, but after nearly eight decades, it doesn’t fail on what it promised.

Directed by Michael Curtiz (Captain Blood, Casablanca, The Sea Hawk, Mildred Pierce, Yankee Doodle Dandy, Angels with Dirty Faces), the movie drips with Technicolor glory, and starred not only Flynn – whom Curtiz had introduced to the world in Captain Blood – but  Olivia deHavilland, Basil Rathbone, Claude Rains, Alan Hale, Sr., Uma O’Connor, Eugene Pallette, and Patric Knowles. With one of the most glorious scores ever put to film and written by Erich Wolfgang Korngold, there doesn’t appear to be a wasted shot or frame. And of course, there was nothing like watching Robin go up against the wicked Sir Guy of Gisbourne at the movie’s finale.