On this date in 1990, the movie Prisoners of the Sun, a.k.a. Blood Oath was released in Australia. Directed by Stephen Wallace, it featured Bryan Brown (The Thorn Birds), Russell Crowe, Terry O’ Quinn (Lost), George Takei (Star Trek: the Original Series), and John Polson (The Sum of Us with Crowe).

IMDB describes it as follows: “On an obscure Pacific Island just north of Australia, the Japanese Empire has operated a prisoner of war camp for Australian soldiers. At the close of World War II, the liberated POWs tell a gruesome tale of mass executions of over eight hundred persons as well as torture style killings of downed Australian airmen. In an attempt to bring those responsible to justice, the Australian Army establishes a War Crimes Tribunal to pass judgment on the Japanese men and officers who ran the Ambon camp. In an added twist, a high-ranking Japanese admiral is implicated, and politics become involved with justice as American authorities in Japan lobby for the Admiral’s release.” 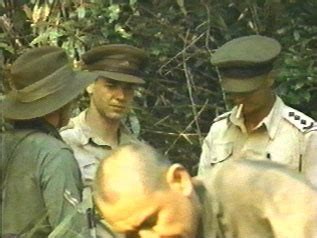